European inflation accelerated more than initially estimated in November, to the fastest pace since May 2001, making it very hard for the ECB to justify moving towards a cut in interest rates even as economic growth slows across the zone. Now normally neither Claus or I pay special attention to the 13 nation eurozone average inflation rate (the so called MUICP), since this aggregate figure masks as much as it reveals, given that in the case of the eurozone the differences which exist between countries are always very important. However since this data point is now destined to play such an important role in ECB history, it is worth making an exception this time round.

The MUICP inflation rate in the 13-nation euro area in fact rose to 3.1 percent in November from 2.6 percent in October, according to Eurostat data released today. That exceeded by one tenth of a percentage point an initial 3 percent flash estimate published on Nov. 30. 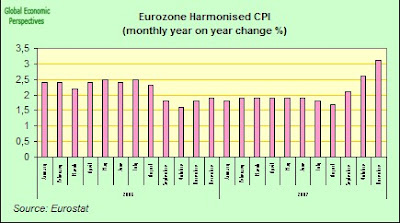 The European Central Bank has been unable to follow its counterparts in the U.S., the U.K. and Canada in reducing borrowing costs, since it has rather boxed itself in with its discourse that surging commodity prices and declining unemployment will trigger an inflationary spiral. ECB President Jean-Claude Trichet even went so far as to say on Dec. 6 that some governing council members actually favored raising interest rates. Commodity (and especially food) prices certainly are a problem, but the unemployment situation is more tricky than it seems, since noone has yet gone to the trouble of re-calibrating the standard NAIRU charts to take into account the sort of ageing labour force employment dynamics we have been seeing in Italy, Germany and Japan, where in each case the drop in unemployment has NOT been accompanied by a surge in wage inflation. The implications of all this still, as I say, await calibration and assessment, and I think that the central banks are treading on dangerous ground if the take strong policy decisions without carrying out the necessary studies.

In Germany, as noted in my last post, inflation picked up in November to 3.3 percent, the fastest pace in 12 years. What isn't clear at this point is what proportion of this acceleration in German inflation is a result of the base effect of January, when, it will be remembered, prices of most retailed goods rose by 3% due to a government VAT hike. So whose expectations exactly are we trying to steer here? Government ones that they should not pass the funding cost of rising elderly dependency ratios onto domestic consumers who are already weakened by the impact on wages and consumption of the rising median age? I both hope so, and hope not. I hope so, in the sense that I hope noone will now repeat this very ill advised move on the part of the German government, and I hope not in the sense that it would be stupid to try and make German citizens pay in the form of a longer and deeper than necessary recession for the errors of their government. Let's learn the lesson and turn the page here. 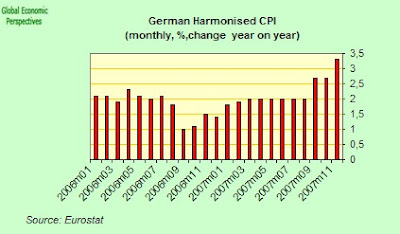 More worryingly, the Spanish rate surged to 4.1 percent from 3.6 percent. This is quite notable, since, as can be seen in the chart below, Spain inflation had been slowing under the impact of the steady unwind in the property market that the ECB's rate tightening policy had been producing, and, as I show in this post here, all the signs now are that the slowdown in the Spanish economy has been accelerated by the sub prime turmoil, and is now developing pretty quickly. The problem is that Spain, even despite this short term surge, definitely needs monetary loosening, and as soon as possible. Nearly 80% of Spain's very heavily mortgaged house-owning population have variable rate mortgages based on Mibor or Euribor, and these are all set to rise significantly in the coming months, even as the Spanish economy slows. And again, if, as now seems quite probable, the two "usual suspect" economies in the eurozone (Germany and Italy) fall into recession next year, they will be joined this time round by Spain, which will only leave us with France, to be holding the fort as it were, in the absence of the other three. 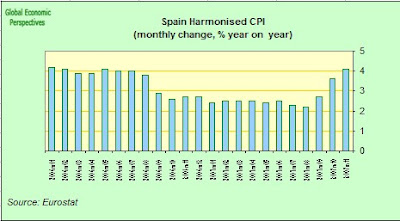 Greece, while a much more minor player in this particular game, is really a very similar situation to Spain, given the extent of the housing boom there in the past, and given the endemic tendency to higher than eurozone average inflation. The Greek economy is now surely slowing, and probably significantly so. 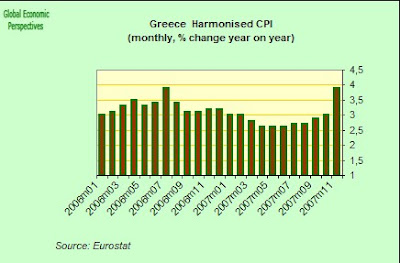 Italy is a rather case, since the Italian economy is slowing by the day, and may well be headed into recession in 2008, and inflation - despite that ever tightening labour market - has failed to surge to the extent that it has in other parts of the eurozone, remaining down at 2.6%. 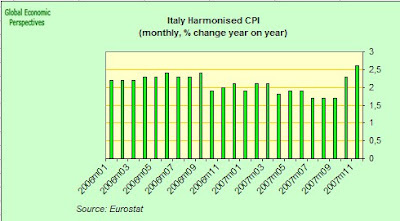 Finally we could just take a quick look at Slovenia, the zone's most recent member, and the only country in the EU10 to have joined the common currency so far. Inflation in Slovenia accelerated to 5.9% in November. I have done a longer country study of Slovenia (here) but all of this does make you wonder just whether Slovenia is headed to some extent off where the rest of the EU10 seem to be going, and if it is at least we ought to ask ourselves the question: is being a member of the eurozone a help or a hindrance in this situation? Does One Size Really Fit All?


ECB staff has forecast that inflation will accelerate to an average of 2.5 percent in 2008 from 2.1 percent this year, according to projections published on Dec. 6. Trichet noted at the time that these forecasts assume no ``second-round effects,'' such as wage increases. Council members Juergen Stark and Erkki Liikanen have both said they disagreed with the forecasts, calling them too optimistic. So far, however there has been little sign of second-round effects. If you look at the Eurostat data you find that eurozone labor-cost growth has been pretty "steady" at 0.6 percent for almost two years. The bigger danger in the eurozone at the present time is that a number of countries fall into a deeper and longer recession that really need be the case. But to adequately handle the needs of each country in critical and complex situations like the one we have on our hands right now we need a much more sensitive type of montetary policy. Unfortunately this is simply a luxury we no longer dispose of.
Posted by Edward Hugh at 12:51 PM

And thanks for this. I didn't have the VAT number, but it does seem that the whole eurozone is now to be held to randsom by the ECB becuase of a bad policy call from the German government. Without the VAT rise German inflation would have been lower (and probably Italian without the fiscal deficit related tax hikes) and the ECB would have had more margin to move.