This news from reuters doesn't sound too promising, not at all it doesn't!

Cash is getting less available and more expensive in the market since the credit crunch started in August as banks hoard cash as a contingency against credit-related losses. This general shortage is being exacerbated by liquidity concerns over the seasonally thin Christmas and New Year period.

And to all this can be added the announcement yesterday from the ECB that they are about to inject a further €30bn ($44.3bn) in one-week funds into the banking sector.

For what it's worth here's the most recent 3 month euro libor chart we have available (the BBA only updates the data with a one week time lag). 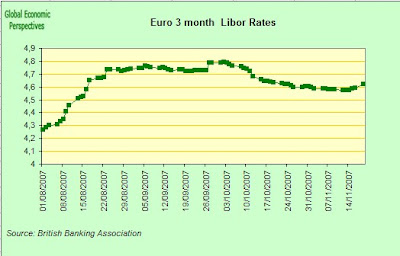 Also today we have news that China's CSI 300 Index has followed Japan's Topix into bear market territory, I have a much fuller reflection on what is happening to Japan in the Asian context up on Global Economy Matters.
Posted by Edward Hugh at 1:43 PM