As the Financial Times reported earlier in the week, the numbers of those employed in Germany has been rising rapidly in recent months.

The number of people in work in Germany reached a five-year high in 2006 with a further surge in job creation expected this year, underlining the strength of the rebound in Europe’s largest economy.Employment rose last year to 39.1m, compared with 38.8m in 2005 and 39.3m in 2001, the most recent highpoint, according to official data published on Tuesday.

Now this is undoubtedly very good news. What the FT didn't spell out though is the fact that this increase has occured against as background of a steadily declining total population and a gradually reducing economically active population, as can be seen from the table below, which comes from the website of the Federal Statistical Office. 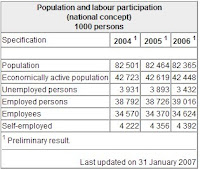 So when we note that:


Headline unemployment is likely to fall below 4m by late 2007, compared with 4.25m in January and more than 5m in early 2005, experts predicted on Tuesday.

we might also like to take note that roughly half of this decrease in unemployment is a result of people actually leaving the labour force to retire faster than new entrants are arriving, and this offers an important, and often neglected, part of the overall picture. Now it remains to be seen just how much of the real improvement in employment is sustainable during the cooling down process which is likely to take place over the coming months. Methinks we are a long way from being able to cry victory here.
Posted by Edward Hugh at 6:10 PM