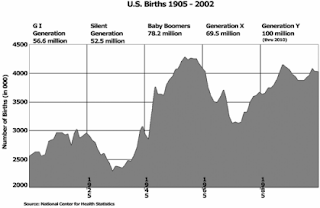 The above summary of US births 1905 - 2002 comes courtesy of the US National Center for Health Statistics via Ken Gronbach's excellent US Demography and Generational Marketing blog and serves as an useful introduction to a recent speech from Chicago Fed President Michael Moskow (thanks to John Booke in comments for drawing this speech to my attention).

This data point is a useful first reference:

About two-thirds of household income comes from employment income, and employment expenses make up about two-thirds of business costs. So the analysis of labor markets plays a key role in assessing the spending and growth prospects for the economy as well as cost pressures on inflation.

Moskow, as is obviously perfectly normal and reasonable, is concerned with sustainability and employment and inflation levels. In this context he makes the following very interesting point:

The demographics of the workforce are constantly changing. New labor market institutions have altered the way firms hire, organize, and pay their employees. Monetary policy could go off track if we don't recognize the impact of such structural changes on the economy and the benchmarks we use to evaluate the incoming data.

Now as he also states in order to assess sustainable growth levels it is necessary to estimate the number of available workers, and thus economists need to understand the underlying trends in population growth and labor force participation. He then goes on to make the following point:

the working-age population grew rapidly in the 1960s and '70s, averaging two percent per year, as the baby boomers finished school and entered the labor force. But starting in the early 1980s, working-age population growth slowed to a little more than one percent per year. And it's projected to fall a bit further over the next decade, given the size of the younger generation entering the workforce relative to the size of the retiring baby-boom group.

Now as Moskow says labor force participation declined considerably during the recession of 2001 and has not returned to its previous levels. The search for the reasons that lie behind this has given rise to a good deal of debate inside the US. One interpretation was that this lower participation rate was a sign of an economy that remained weak long after the official end of the recession. This interpretation assumed that many people who couldn't find work gave up looking and withdrew from the labor force. The Chicago Fed President has another interpretation: that the decline in US labor force participation was mainly a manifestation of long-run changes in US demography as well as a number of ongoing cultural trends.

One of the demographic trends relates to the aging baby boomers. There's a lot of focus on them approaching the traditional retirement age of 65, but people tend to scale back their participation well before that. Indeed, more and more boomers are past the age at which people are most likely to participate in the workforce.

The age distribution of the US population has implications for the number of jobs the US economy needs to create. As Moskow notes, during the 1990s the economy needed to create 150,000 new jobs a month just to mark time on the unemployment rate, but with the looming retirement of the baby boomers, this figure may drop to something nearer to 100,000.

He then goes on to point out that a number of social and cultural factors could change this picture, like a decision by boomers to work longer than has previously been the norm, and then comes a most surprising and interesting statement:

Of course, the proper benchmark depends on other factors as well, including growth in household wealth, the long-run health of Social Security and Medicare, and trends in fertility, life expectancy, and especially immigration.

Now I think this is the first time I have seen these factors - immigration, fertility and life expectancy - linked in this way. Could he, I have been asking myself, have been reading Democracy Matters? Joking aside, I think he is absolutely right, you cannot make a worthwhile evaluation of sustainable growth for en economy over the longer term without incorporating these three parameters in your model (and this is, of course, only one simple supply side issue (and only labour at that, without thinking about life cycle savings). But I would say there is enough with what MosKow says, once you incorporate these three simple parameters in your model, the neo-classical theoretical postulate of steady state growth is DEAD, stone dead (thanks John).

Of course Moskow is a very intelligent commentator, and he is quite clear that it is not only the quantity of workers that matters, but also their quality, since this affects productivity growth.

And here, of course, the evolution of education levels is important. In the US context he is not exactly positive about the current situation:

Gains in education and other workforce skills by new entrants, and skill improvements by remaining workers, could allow us to avoid much of this decline. But if we consider recent education trends, I'd say we have our work cut out for us on this. College graduation rates are growing, as families have noted the very high and climbing economic returns to education. But high school completion rates have stalled, and there is a great deal of dissatisfaction with the results in our public elementary and secondary schools, especially given our already enormous investment in education. Clearly, more systemic changes are needed to achieve better educational outcomes and boost the growth in worker skills.

So one of the concerns in the present US conjuncture is that labour quality may be negatively affected by the rapid retirement of boom generation workers. Another level at which feedbacks may operate is via birth postponement, and its consequences for fertility if the mentioned increase in College graduation rates is substantial. That is the flow of workers into the labour market may be reduced in the short term by the decision by large numbers of young people to obtain more education, and in the longer term by the reduced flow of children which may be produced via birth postponent and the impact of this on fertility (both in timing and final quantities).

Also in terms of the short term evolution of productivity he draws our attention to the following:

Now since many workers in this age group have historically been regarded as among the most productive (so called prime age workers) the fact that they may now have peaked as a percentage of the labour force might be considered to contain some implications for potential future productivity growth.

All in all, a very interesting speech, which is well worth reading in full.
Posted by Edward Hugh at 9:40 PM

Greetings Bonobo Land!
Dear Edward Hugh,
Thank-you for the credit on the Live Birth Chart.I have been using it for years to prove the earth is not flat. It continues to stun and amaze me how few people at any level have even a rudimentary understanding of the significance of shifting demography. Forgive the trite metaphor but finding your blog is like finding an oasis in the desert. Voltaire said," Common sense is not so common." I feel better now. Keep thinking. Keep writing. Ken Gronbach

The duration of the work is on average 34 hours per week in the United States, to compare with one duration of 36 H in France, 32 H in Great Britain and 29 to 36 hours in the principal European countries, for the whole of full-time and part-time employment.

These values can surprise. They however come from the official statistics of each country and they give a more exact idea of reality than the usual statistics limited to only full-time employment.